The grapes of softness. 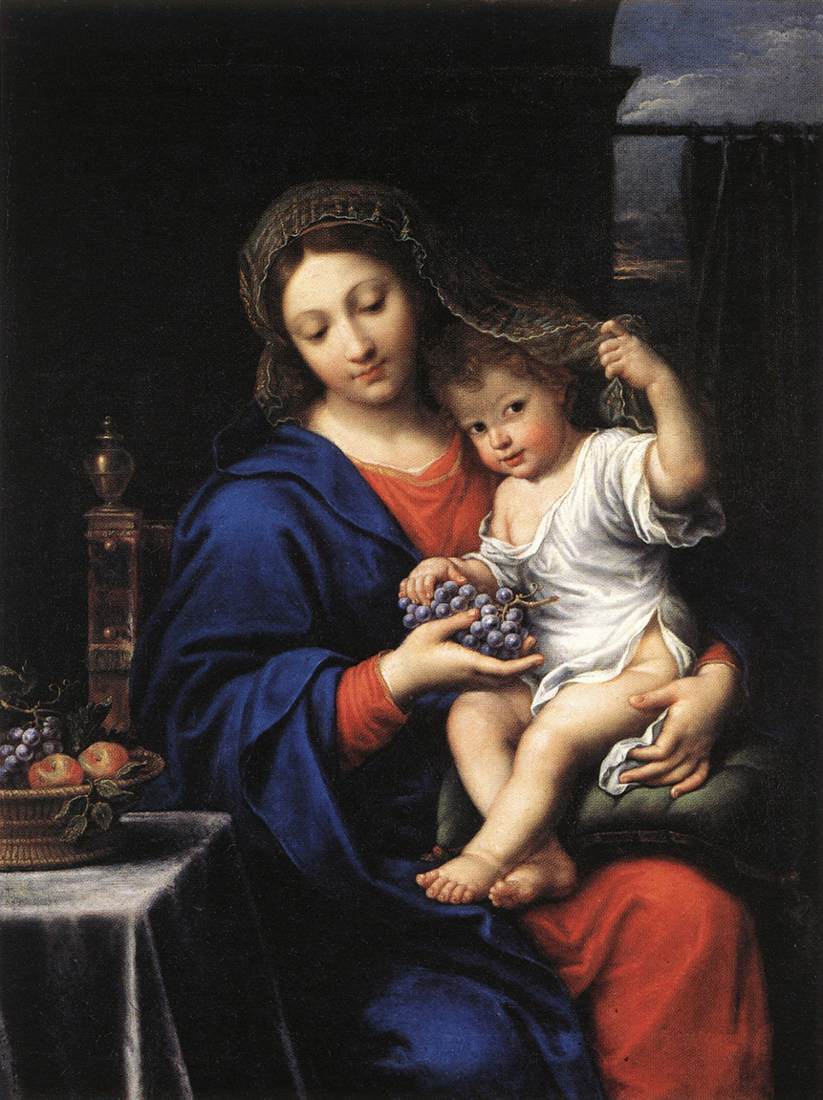 Like Le Brun, Mignard is one of Vouet’s pupil. In 1636, he travels to Rome and remains there until 1657. The « Virgin of the grapes » was painted during this roman time.

The very classic subject of the virgin Mary is enhanced with iconographic important details like the grapes the mother gives the child, in a Eucharistic way or the way Christ lifts is mother’s veil, perhaps to herald his resurrection.
The painting is completely centered around the feminine figure, almost in a close up, amid a dark background. A diagonal ray of light starts from the bottom left of the image, illuminating the young mother’s and her child soft features et finding its way toward the architectural opening on the upper right corner. The eye follows those barely perceptible incentives around the characters, converging to the centre where stand the grapes.Everything, from the character’s glances, to the suggested movements and all major composition lines bring back to them.

Italian painters influence is stronger here, first in the dramatic chiaroscuro of the late Caravaggistis, then, with the intimacy and softness of the depicted scene, reminding of Luini’s pieces (XVIth century) or the contemporary Sassoferrato and, finally, the soft, plain and delicate palette and soft light suggesting a Venetian influence.The highly intellectual and philosophical range of this religious painting, might also reveal Poussin’s aura.

Despite these inflexions, the formal perfection, the impression of well-mannered restraint and the hint of studied attitude sets the painting closer to French masters like Vouet. The very present care about elements traditionally from still-life (fruits and fabrics) shows, if not a reference, at least a very probable influence of Northern schools.

Mignard is famous for his devout paintings, particularly Madonnas of very formal and refined beauty, nicknamed « Mignardes », that were highly regarded and sought after.
Back in France, Mignard took side with the Rubenists against the Poussinists like Le Brun. For Mignard and Le Brun, the argument was purely theoretical : both their style are almost identical at the time.