The perks of being a wallpaper

This picture shows a tiny part of an ensemble that hangs on the walls of a chinese boudoir in a french little castle from the XVIIIth century.
Well hanged, for that matter.
In order to be pampered, and -let’s face it- boy did it needed it, it was removed from its walls and is now being lovingly taken care of by a specialist.
And believe me, removing paper that had been glued to a wall for more than a century was oodles of fun. I am still laughing.

To have a glimpse of how things were done, have a look-see on this  documented removal of  a Chinese wallpaper from the walls of an historic interior from the Victorian and Albert museum. The process and methods are more or less the same.

Anyway, removing said wallpaper in order to restore it has uncovered parts of it that had been protected from light ever since the very moment the wallpaper was put on the walls. 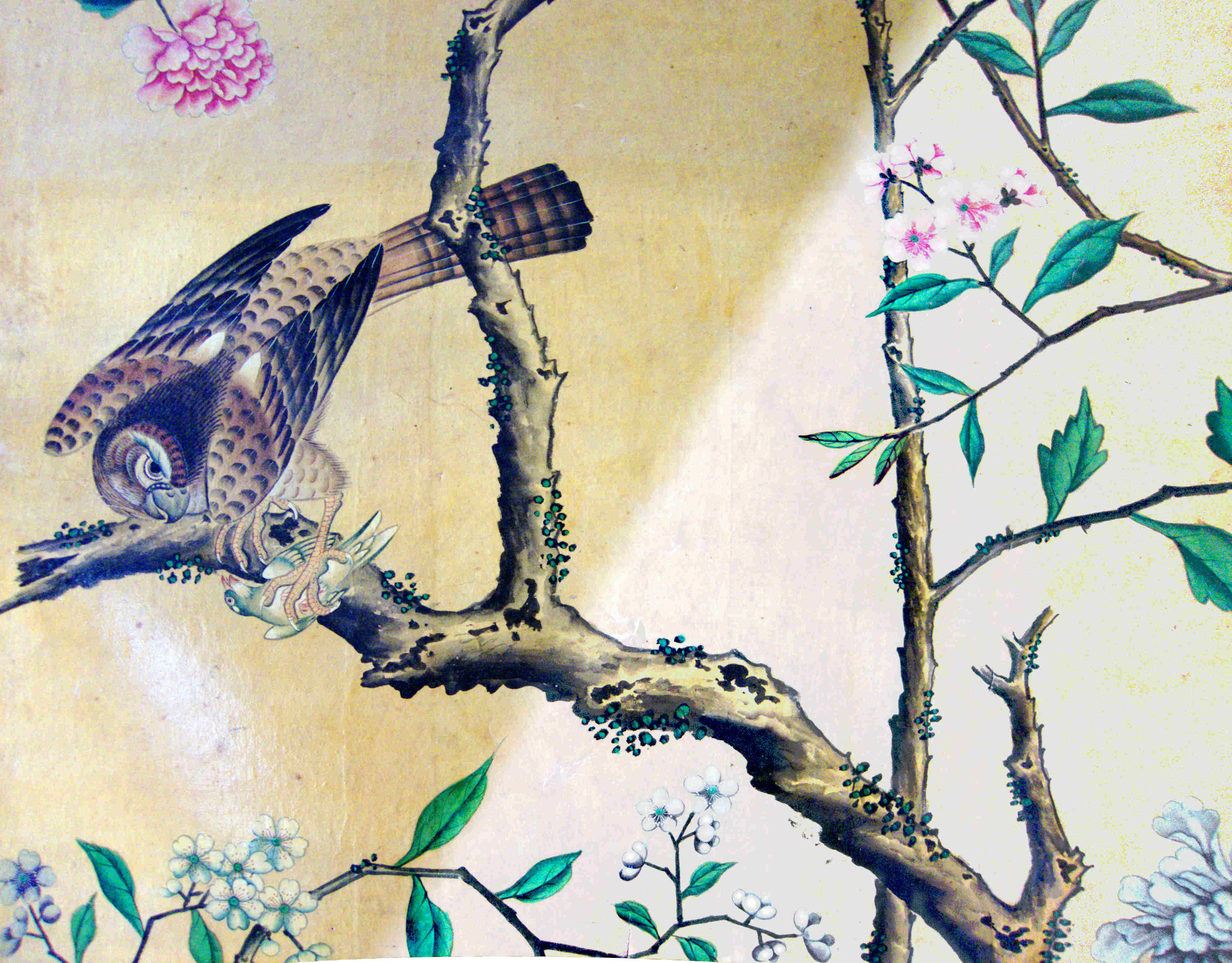 Behold the difference in color ! The left part of the picture shows the paper as it is now: yellowish, with a sort of powdery tarnished varnish that clings to everything it touches. Just like it does when you touch a moth. The right part is a computerized version of how the wallpaper was, using the uncovered parts as references.
According to you, how should it be restored ?

Well, if you answered “get rid of the yellowy-yucky-thingy and bring back the underneath whiteness of it all”, you might need to consider a few things.

First, there’s no way a paper that old, exposed to light, smokes, water and dust remained white on every inches of its surface. Its very material core would have betrayed it on that point.

Then, the yellow-yucky-thingy isn’t as bad as it sound. First, even though sources are hard to trace on those particular pieces, there’s a fifty-fifty chance that it was applied right at the beginning, to protect the paper. Granted, it hasn’t aged beautifully but that wasn’t what it was supposed to do. Removing it may or may not remove an important historical information on how things were done in the past and therefore how it should be taken care of in the present.

Moreover, consider the wallpaper in its chronological context and that of the castle. Do you think that, through times, people were more used to see a bright and colorful decor on a white background or a yellowed paper with colorful yet discreet ornaments ?

Yep. You got it. Probably the latter.

Curating, preserving and restoring something whether a wallpaper, a vase or a mummy (don’t get me started on those ones) is often like a criminal investigation.
Before one can take a decision on what to do and how to do it, one needs to assess the situation by compiling as much informations as possible to create a clearer image of how things happened. And ended up creating what you can see now. Usually with dust.

Luckily, it has more to do with the holmesian-armchair-and-books-is-there-any-crumpets-left mysteries than the grisly reality of every day police work.

We use cookies to ensure that we give you the best experience on our website. You can accept or oppose these little helpers by clicking on the button of your choice.AcceptRefuseRead more
You can revoke your consent any time using the Revoke consent button.Manage cookies