Augusta Ada King born Ada Byron (1815-1872), here shown in an 1836 oil portrait by Margaret Carpenter (1793-1872) , is an intriguing character. Legitimate daughter of the infamous poet Lord Byron (1788-1824) and the scholar Anne Isabella Milbank (1792-1960), she was a scholar in mathematics. With the help of Charles Babbage (1791-1871), she took upon herself to write an essay on his analytical engine. The engine itself was never fully constructed, though pieces of it are curated in London’s Science museum. 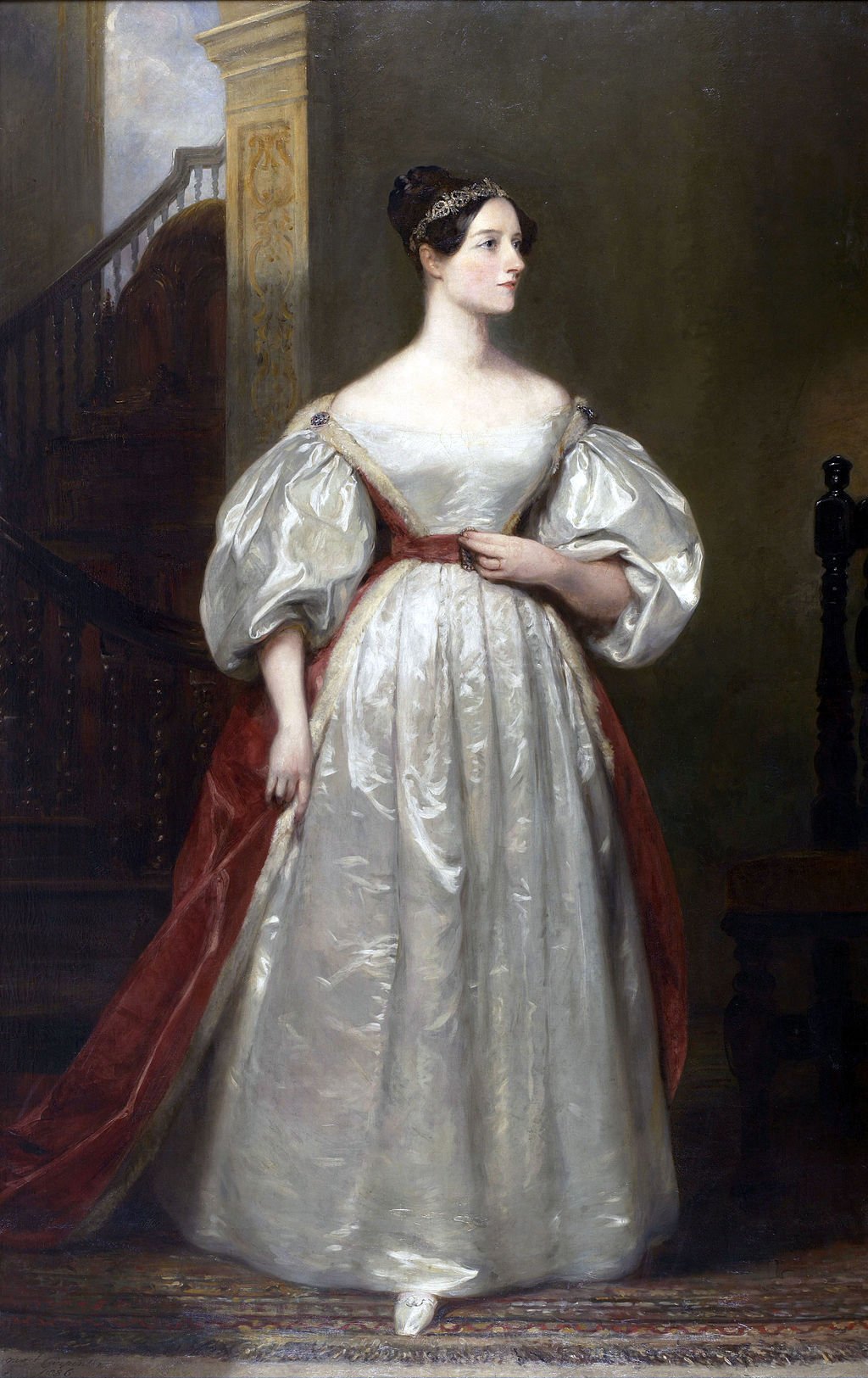 The engine isn’t just another attempt at a calculator but also serves as an analytical tool : it has a self-contained mechanism allowing it to select and use some of the informations it’s been given.

This mechanism is nowadays known by developers as a « function », that is to say an action a machine is compelled to exert under certain conditions.

Historians are still divided as to the part L.A.L. (standing for Lady Ada Lovelace) played in writing the essay and how much she has added her own thoughts to it. However, they seem to agree on two points : she understood how the engine was supposed to work, a prowess at a time when young woman’s education seldom included sciences, and above all, she foresaw the engine possibilities way beyond a mathematical use to solve complex equations. So much so that she is now considered as one of the pioneers of modern computer science.

According to her :
« Supposing for instance, that the fundamental relations of pitched sounds in the science of harmony and of musical composition were susceptible of such expression and adaptations [as in the mathematical field], the engine might compose elaborate and scientific pieces of music of any degree of complexity or extent… »
It seems Babbage himself missed this vision of the engine’s capacities.

Lovelace’s work was soon forgotten after her death in 1872. Well, to be fair, it wasn’t vastly broadcasted before, to her own grievance. In 1950, mathematician and cryptanalyst, Alan Turing (1912-1954), used her work and Babbage’s to inspire and enrich the development of his work on computers.
Lovelace’s life was the subject of countless essays, books, fictions and presentations : opinions of authors ranging from basic fangirling to raging reviling. As the 150 years old carefully curated archives are being studied, more and more informations come to light.

One certainty is being put forward : her idea, as well as the will she put into defending it, was innovative to say the least, particularly in regard to the social and historical context she lived in.
To preserve this idea, the stamina and the intellectual audacity behind it is also ensuring it can, and probably would, inspire new developments as it did with Turing.

But how does one curate an idea and preserve it in times?
Even though an idea is immaterial, most of the time it has sprouted tangible elements vouching for it. It is a fickle thing though and no matter how many written documents, notes, items or models are curated, most of the time they’re only representative of one thing: the pre-conceived idea the curator has. To tamper that well-known fact, in order to be as exhaustive as possible, curating ideas means also curating elements of the context they were born in. Most of the time, context is everything to try and fully grasp the new paradigm those new ideas created.
For example, Pr Ursula Martyn thorough and detailed work in the archives, as stated in her communication entitled « The scientific Life of Ada Lovelace », au Gresham college en novembre 2015 puts forward maths education and the science of maths in the XIXe century that benefited L.A.L.

Curating elements to testify for an idea, a concept or a notion is more complex than it seems : what one would keep as key, another one would disregard as extraneous. Worse, curation can also have a time stamp : what would be kept today isn’t what might be kept tomorrow.

Try a little experiment : ask three people that know you well to choose three items that would define you, what you are and what you believe in. And then ask yourself what you would have chosen…