The art of things well made

In France technical and industrial heritage has officially been a part of cultural heritage since the early 70’s, despite the fact the latest is historically leaning toward more «traditional art » (whatever that means).
It is interesting to note though, that some artistic pieces have been precious iconographic testimonies of the history of Industry itself way before some long haired flower power fanatics considered them to be.

To think of any art object as an object requiring technique is, de facto, thinking technical aspect is one way to consider an object. Artsy or technical objects are considered differently, yet, the core idea underlying their importance is the same.
Bronze casting is a good example of how hard it is to pinpoint a frontier between art and technique. One can also consider the eminently symbolic co-dependent relationship between the Chemical Industry and colors ever since the first man thought it a good idea to splatter ochre on his cave walls. Some of the best known artists were born in the very same industry they were destined to take to higher grounds and their lives were also dedicated to master and develop it.

The art and industry dichotomy is fairly recent. The ever growing chasm between them seems to have begun in the end of the XIXth century : authors now blame the increasing mechanization of human tasks therefore severing the human act from the creation of objects that will eventually end up in a discredit toward machines and industry. Remember the aforementioned hippies ? Well, now they wear turtlenecks and blazers with elbow patches.
The Louvre, then one of the french crown marketing place, has been the witness of the time where art and industry were considered twins. During « salons », brilliant art pieces and mesmerizing industrial prowess were shown and admired side by side, no one being the wiser. True, dear reader, industrial heritage was in the Louvre way before the Venus of Milo ! 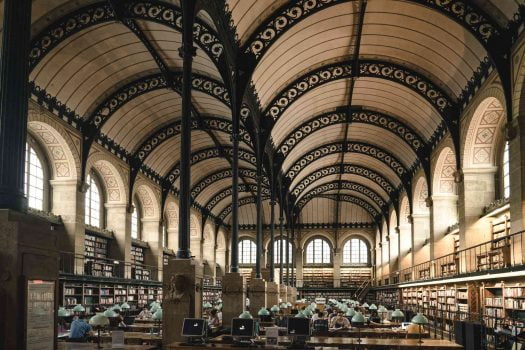 Intellectuals have tried to circumvent a separation that was becoming obvious in creating and spreading Decorative Arts movements. The French institution of l’« Union centrale des arts Décoratifs » was created in 1882. Its goal was to maintain a tangible link between industry and art by creating convenient yet visually pleasing pieces.

As your read those lines, art and industry seem to be tying new knots. Be that through designers creating mass produced items, trending sometimes so much they’re as pricy as art pieces or knick-knacks filling your favorite Ikea catalog.

But I digress, just remind me to ask Jean-Knupp to bring me back a 1500 special edition Varukdall candles discounted set next time he’s at the store.

Artists played with the very notion of industry and their use of the social and technical paradigm it creates. During the XIXth century, the industrial universe is the subject of paintings hanging from galleries to museums, celebrating machines, magnifying workers’ labor as well as factory owners and their families : in a way being a witness for social history.

During the XXth century, artists’ use of the industrial paradigm shifted : art denounces capitalism as a myth (Russian avant-garde, Pop art…) or machines overpowering humans and the mankind apocalypse that will ensue (american cinema from Fritz Lang’s Metropolis to the Matrix trilogy).

One can find a good illustration of issues and paradoxes of the relationship between art and industrial heritage in buildings, like the Grand Palais in Paris or the Sainte Genevieve library, where art and industry meet without heated passion but in harmony.