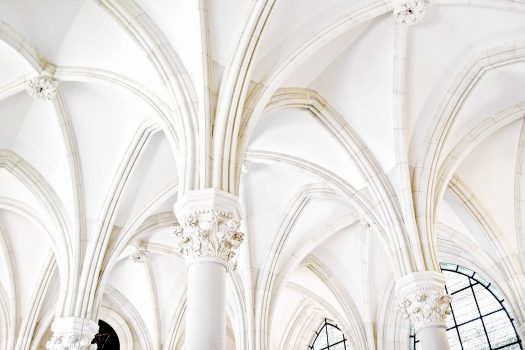 In a nutshell, plaster is a generic designation for a protective or decorative coating. As a material it is most commonly prepared by heating gypsum then grinding it to obtain a very fine powder. This powder is eventually mixed with additional chemicals to modify certain of its properties.
Once mixed with water, it gives a paste that will solidify within minutes.

The word can describe both raw material and elements done with it. The very first occurrence of the word “Plastre” dates back 1268 in the “Livre des mestiers” by Etienne Boileau. Though the word is recent, plaster usage isn’t : archaeologists found evidence of processed gypsum during the neolithic era. Ancient Levant, Mesopotamia and Egypt used plaster. The Romans used it as coating for buildings and statues and the empire’s expansion brought this practice all over Europe.

Places with numerous gypsum mines soon developed and perfected plaster techniques. In Lutetia (future city of Paris), the Montmartre mines have been exploited ever since hence the name most commonly used for this material: « Plaster of Paris ».
Plaster has many advantages (as well as a few drawbacks) : it is fireproof, only releases water when it burns and allows very detailed decors though setting to be hard as stone.

On the not so great side, it tends to thaw when it’s wet.

A little anecdote might emphasize the commercial importance of plaster for Paris in the XVIIth century.
The city underwent a great fire in 1621 on the Ile de la Cité between the Notre-Dame bridge and the Pont au Change. By the time London suffered an even more dramatic one in 1666, and with an economic and industrial strategy in mind, Louis XIV was able to pass into law the mandatory use of the fireproof material in 1667 to prevent any large scale fire. History shows he was right.
Plaster is a polymorph material used in numerous ways in numerous domains such as buildings, medicine (remember your PE accident in 3th grade, when you broke your arm?) and in restoration  to fill a void or take a missing part place  for example.

In this last case, plaster used isn’t your regular Home Depot mix : it must be pure gypsum to begin with. Any unknown chemical added might endanger the restored piece in time. It is however allowed to add a few elements whose behaviors are known and documented to emphasize preservation qualities (stable color pigments, antifungals…) as long as it respects the object’s material<.

Paradoxically, plaster-composed pieces such as statues are most of the time the last one that could sustain plaster based restorations: water withheld within the newly added parts threatens the older ones.

Photo by Sophie Sollmann on Unsplash