Let’s shake hands on that ! 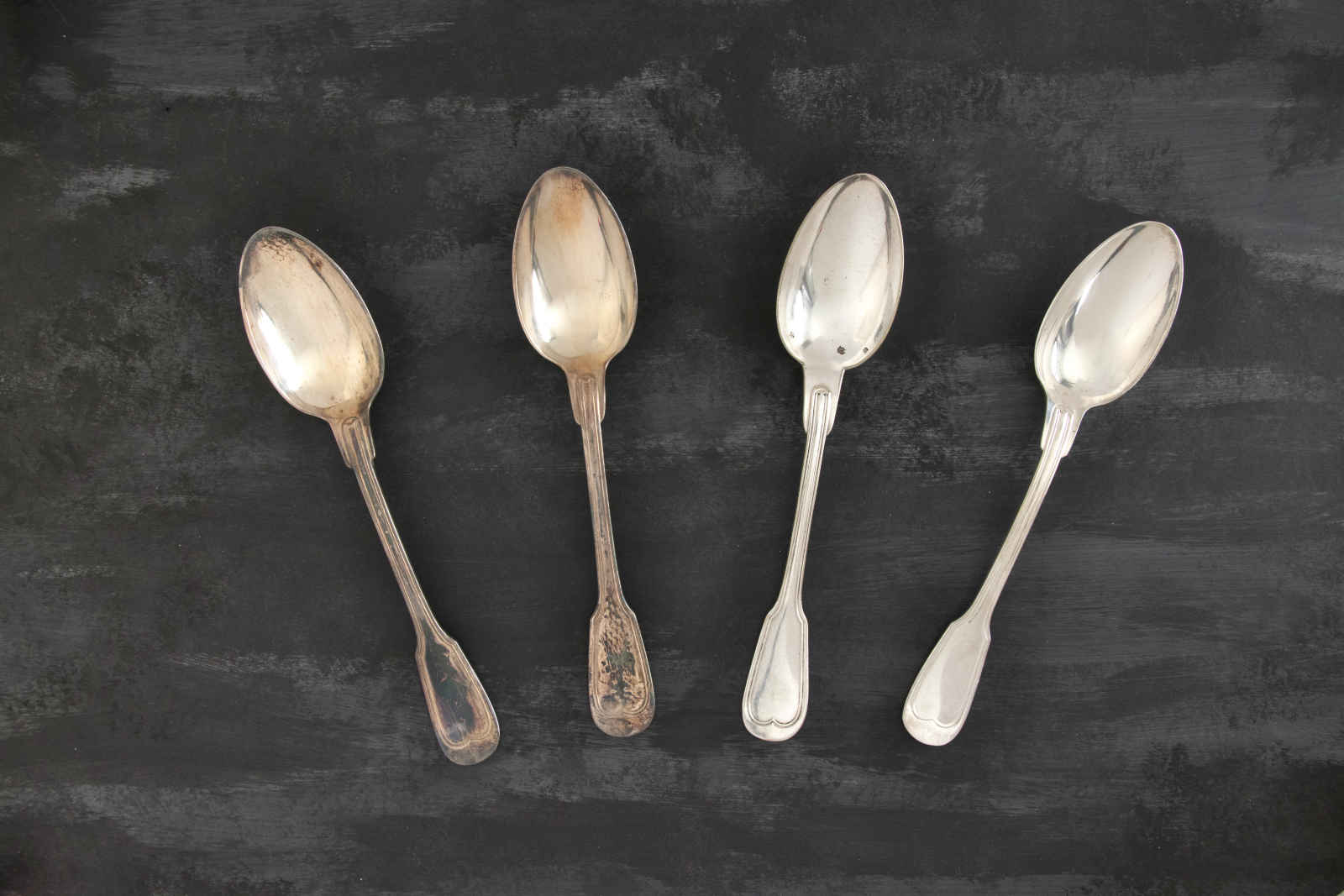 Some of us store various amounts of gizmos and doodahs in attics or garages, washed up in improbable boxes invariably labeled « misc. » during a consequent period. Among those items is often the infamous – heavy and space consuming- « Granny’s » old canteen of cutlery. Whether or not the aforementioned Granny can be precisely identified is irrelevant at that point. Suffice it to say, she’s usually from, you know, « the other side of the family ».

In short those are set of forks, spoons and knives one has always -vaguely- been aware of, lavishly spread in a brownish satin lined box -not unlike a coffin- containing rows of blackened metal. Before it ended up in the attic, said box was most of the time at the bottom of a cupboard. It was rarely opened and its utensils rarely employed because that would have implied a few hours of heavy polishing before and after usage.

Who has time for that nowadays ?

Fast forward a few years and said canteens are commonly found in antic shops, thrift stores or yard sales. Most of the time still very dark because, still, no one had time for heavy polishing. The most curious among you might have tried to gather informations about these domestic « treasures ». You then came across the dreaded world of hallmarks and their legal implications. Those marks are precious allies in pinpointing the origin, age, composition and, well, price of silver or gold items. Sadly, this tremendous source of information is hidden behind a strictly codified and complex system, very few can completely master. Though most of it can be found online, one must first know where to look for.

Hallmark types can go from regional, national and international legal requirements, to guilds and international alliances recommendations, with variations emanating from workshops and segregated by metals. Of course, to make matters easier, it changes throughout history. As cunning as you are, you’re starting to see where all this is heading : context !  Whatever item you’re trying to decipher, whether it be a master’s painting or a humble spoon, your only allies in all this are the elements you can dig out of its history.

Let’s take the example of the canteen the spoons from the photo at the beginning of the article come from. Micro-photographs of their hallmark is shown below. The canteen itself contains 6 forks and 5 table spoons. 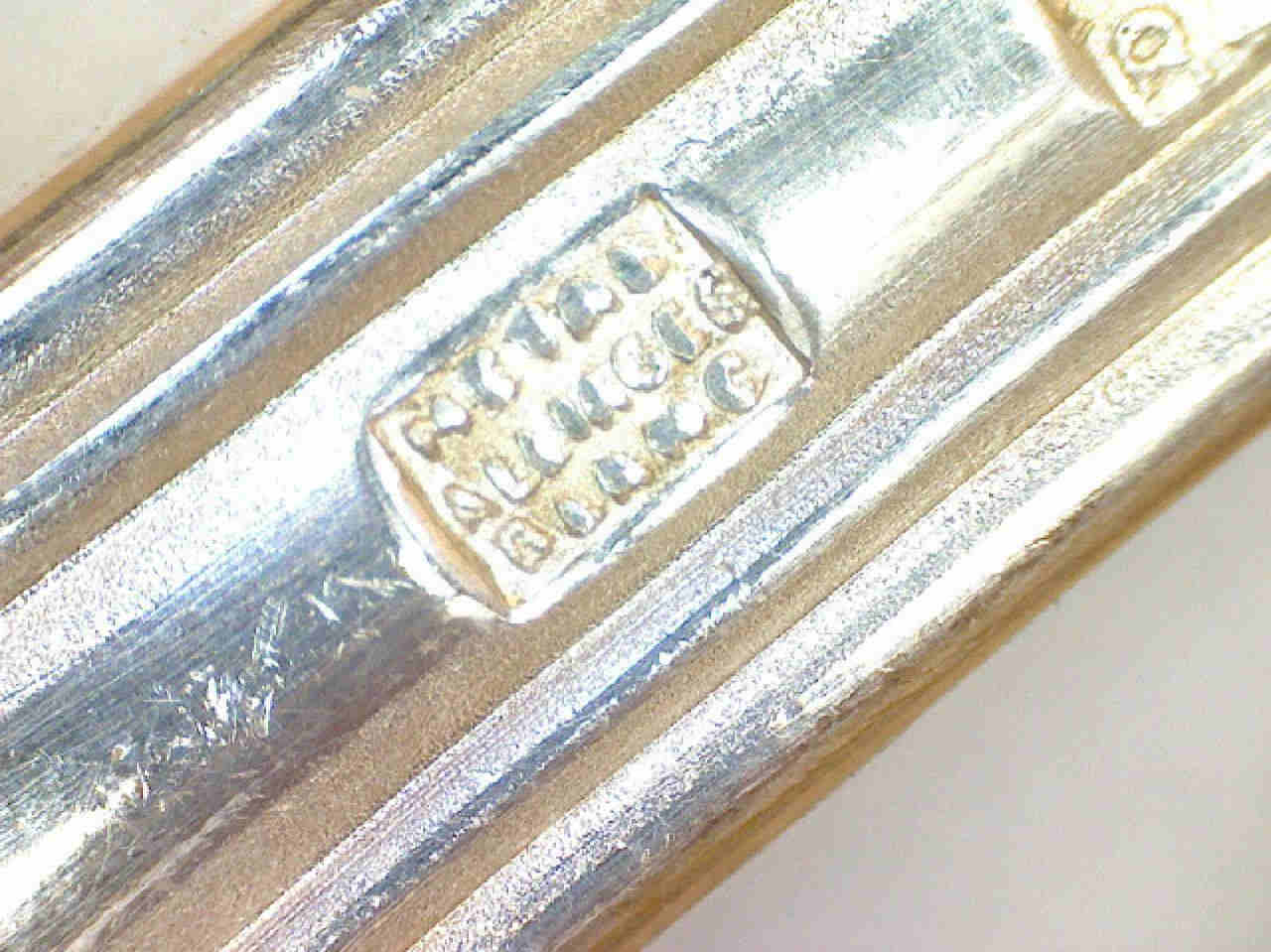 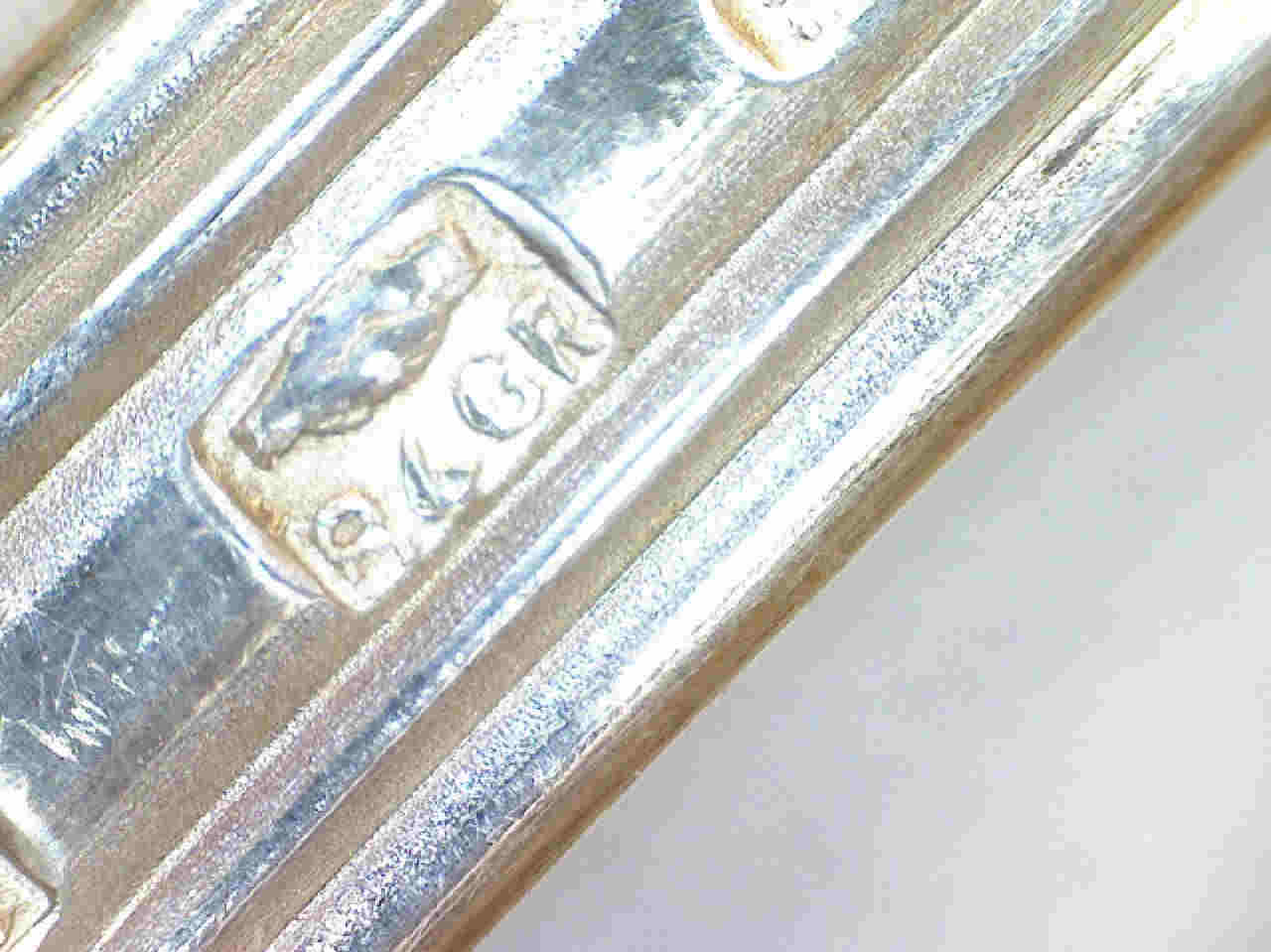 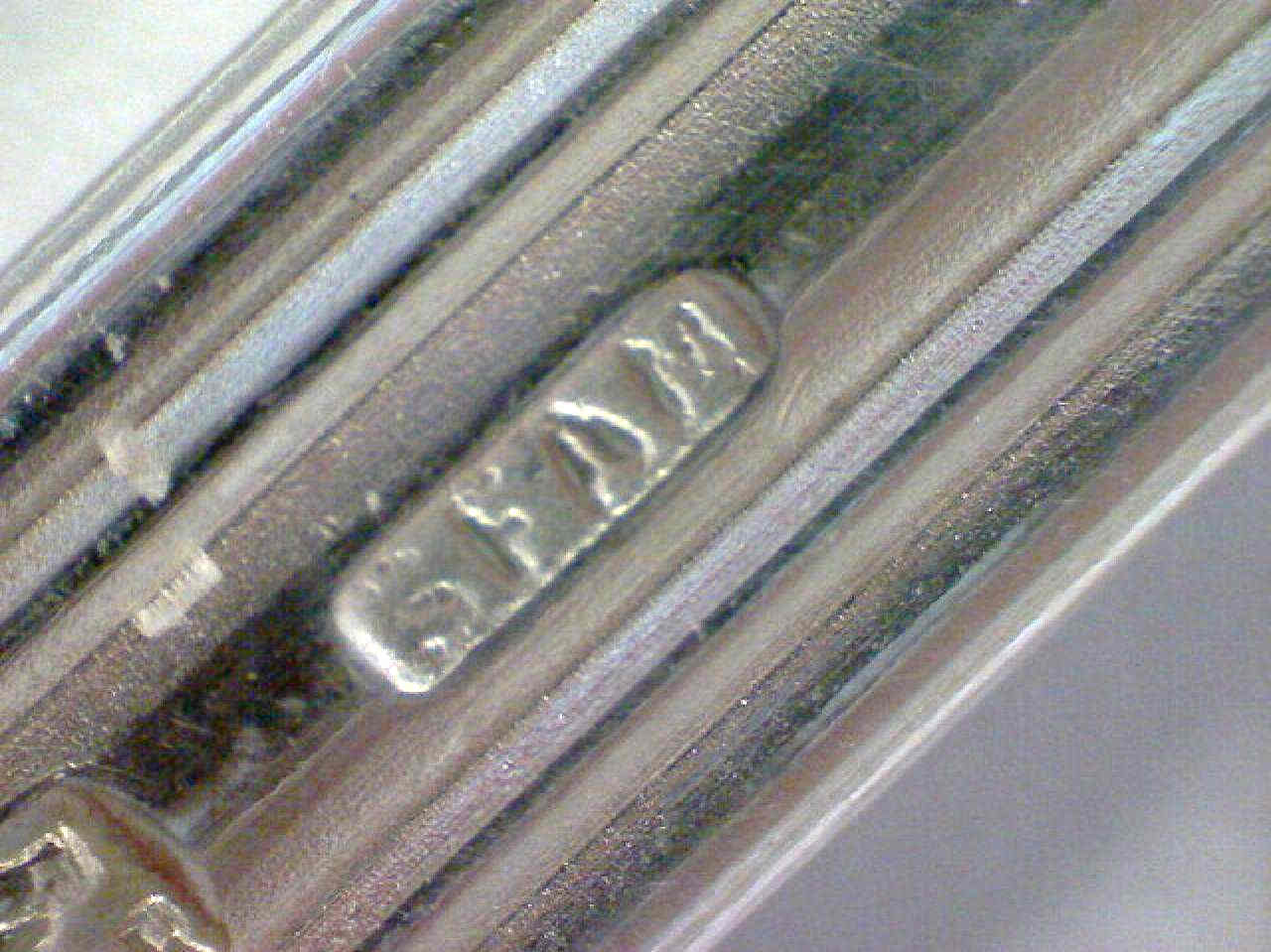 The canteen’s history can be traced back to the early 1950s. It was bought in France and has been there ever since ; « métal alliage blanc » -french for « white metal alloy »- is explicit enough. Though one of the hallmark isn’t easily decipherable, underneath is the mention of the fineness of silver involved : « 84gr » for 84 grams, as french laws then required. « SFAM » is the worshop that produced the pieces : a little net surfing leads to the « Société Française d’Alliage de Métaux » -SFAM in short- created in 1926 in Bornel, Oise1 region, and renamed the « Orfèvrerie de Chambly » in 1973. It closed in 2004.

Identifying the blurry mark is then easier : very fine silver was rarely used in silverware, far less in cutlery. Then, the use of the usual jewellery silver hallmarks is highly unlikely. One hypothesis remains, confirmed by the observation of the same mark on the other items of the canteen : the hallmark depicts a « handshake », that is the symbolic oath of the workshop’s good faith and the trustfulness its client can have in the number indicated below. 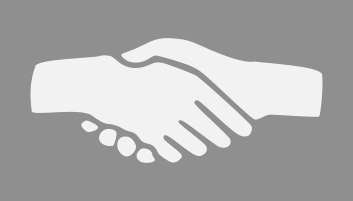 Artist rendering of the hard to read hallmark

This hallmark is less poetic than it appears. Remember the legal requirements ? Well, in case the treasure department checks the factory’s production and discover a discrepancy between the silver usage declaration and the actual amount of silver used, this mark creates the legal equivalent of a « smoking gun ». No « good faith error » can then be invoked…

On a side not, the decor these pieces show is a very common one in Europe since the early 1700s,known as «à filet » or “Chinon » or « fiddle and thread ».It has been spread worldwide by silversmiths like Christofle or Puiforçat.

Now, let’s play a little game of wheel of fortune. According to you, what amount of pure silver can be obtained from this canteen ? Be aware that there is, indeed, a trap.

Do not trust the hallmarks ! At least not completely. « 84g » means 84 grams of silver were used to coat the white alloy pieces of the canteen.

That is 12 pieces in total : canteens were sold with an even number of items of the same species but, here, there’s a spoon missing. It would then be theoretically possible to obtain 7g of silver per item (84 /12=7). That is to say 11×7=77g for all the remaining ones.

A spoon isn’t shaped like a fork : it has more surface to cover therefore more silver had to be used to do so. Besides, silversmiths in the early 1950s produced a very important amount of « 84g » canteens but a complete set also include dessert spoons, knives and a ladle (the only odd item). I’m feeling generous : let’s forget about the knives. The blade is never a silvered one and 1950s taste is not to metallic handles anymore.

Our estimate basis might be even more incorrect than anticipated. If the set in incomplete, lacking not only one item but entire species, we have to divide the amount of silver between not 12 but 18 (6 forks, 6 table spoons, 6 dessert spoons). And one more time, it will eventually be false : a dessert spoon takes less amount of silver to be coated than a fork than uses less than a table spoon that is a lightweight compared to a ladle.
Let’s not forget about the ladle. One mustn’t forget about the ladle.

Without access to one of the S.F.A.M. catalog that would allow us to be sure it’s complete, we must assume it isn’t. As far as the amount of silver is concerned, one cannot consider the items separately. You may now begin to understand why, in this case, a full set has more financial values than an incomplete one.